The night before this game, Coach Rob sat with the defensive team and asked why they were struggling so much.  We knew the harder competition was coming and we truly needed to sure the defense up.  The fields were hard, fast and often times not even.  The result of the meeting was if we beat Tyler, we would stay on the field afterwards to take defense practice to prepare for the next day.  Since Boston was the one seed, it got a bye while Tyler had to play Columbus in the morning game which they won by a low score of 6-1. 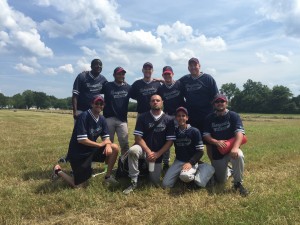 In a rare moment, the Renegades actually won the coin toss and took the home field.  This would be the game that Chrsitain Thaxton would have the training wheels take off as we needed him to get some at bats before the tough opponents showed up on the schedule.  No knock on Tyler, as they have been an up and coming team and had won 3 of 4 games to this point with wins over the NJ Titans, Canada and Columbus.  Their lead off hitter, Derrick Floyd amazed the Renegades as he stood at 6 feet 8 inches tall and dwarfed every player on our roster.  He also scored on the first at bat of the game and Ron Jordan plated a run to go back-to-back for Tyler.  This was not the way, the Renegades needed to sure up their defense.  As the game was being played a tractor was cutting and bailing hay in a neighboring field which slowed the game down…though later in the match, the Renegades defense would choose to play through the noise.  The story of this game was the bottom of the first inning, which set many Renegade records.  Joe McCormick led off the match and hit the second pitch for a weak pop fly down the third base side that landed at about 70 feet for a score.  Larry Haile on a full count hit a weak grounder to the 3rd base line that barely rolled out past the 40 foot arc for a score.  Rob Dias then hit the best ball of the inning that may have traveled near 100 feet to the left side and scored.  If this weak start was not enough, Shayne Cantan then hit a ball off the end of his bat that spun like it was hit with side spin from a pool table.  Since the field was fast, the ball landed at about 40.1 feet for the 4th run of the inning.  Guy Zucarello strode to the plate and on the second pitch hit a weak grounder up the middle that looked like an out…but Jason Gainey overplayed his position and just as Larry Reed was going to make the play, Gainey crashed into him and Guy scored the 5th run of the inning.  Then Tim Syphers came up and hit a ball to the right side which the defense stood around looking for because Tim hit it hard enough that he hit most of the beep out of the ball…and the ball went speaker down into the grass..and nobody could hear it.  The first six batters scored on all junk.  So we turned the order over and McCormick scored on a pop up to the left side…this one struck better than the first.  Larry also scored on a nice drive to left to make the score 8-2.  Rob Dias strode to the plate and on a foul ball he came back limping to home plate with what looked to be the first serious injury of the week.  Rob is one tough character but with an 8-2 lead and no outs, there was no reason to force him to play.  Off the bench came rookie, Christian Thaxton with a 1 strike count.  He calmly worked it to a three strike count and then laced a shot to deep left field where he was instructed to not run 100% due to his hip flexor.  The team erupted and the score was 9-0. Shayne Cantan then hit a bomb down the third base line to make it 10-0.  Guy Zucarello plated a run on a grounder up the middle and Tim Syphers scored his second run of the game…his first ever multi run game and the score was 12-0 and nobody was out.  Mccormick and Haile would both plate their third runs of the inning.  Thaxton would hit a ball harder and longer than the first one he hit and we had scored 15 consecutive runs.  Joe Mccormick had a chance to score 4 runs in an inning but he struck out.  When the dust settled and after more than an hour…the Renegades invoked the 12 run rule and were up 16-2.  Coach Weissman decided this would be where the team got its defensive practice and left the starters on the field for the most part for the rest of the game.  The defense had some gems and some help.  Larry Haile made a nice play running toward the line and not giving up on a ball where a Tyler base runner missed the base.  The web gem of the game was in the 3rd inning when John Ingram lined a shot off Joe McCormick’s chest and Mac made every attempt to cradle and catch the ball…to no avail.  In the end, Boston won a big game which meant they were done for the day and could rest.  They set some team records in this game including, 16 runs in an inning (most ever in an inning), a team .842 batting average (surpassing .684 vs Stockton in 2007) and the fist time the Renegades had ever 12-runned a team three times in a season.  This win over Tyler was the 6th in a row in this rivalry.  Tyler was the first team the Renegades ever beat in 2002.  Boston would rest up as their morning opponent would be the Colorado Storm, a team that finished third in 2014 and a team whom the Renegades have not had a lot of success against.  The team would have to see how Rob Dias was feeling and if Christian’s hip would be good after playing today.