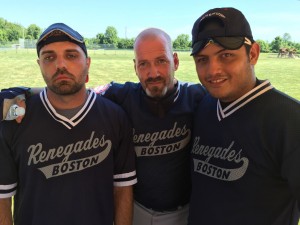 Rob Dias, JJ Ward and Shayne Cantan pose after a victory against the Indy Knights, For Dias, this would be his first career 4 run game. For Shayne and JJ, this was their first runs of the season

The World Series started off for the Renegades against a new team that was a spin off from the Indy thunder.  This team was comprised of players from the Thunder and the Wichita Sonics, who were not at the series this year.  On the mound was first year pitcher, Lindsay Woodard.  Right from the start, things started well for the Renegades as Indy went down 1-2-3 with two weak grounders hit to Guy Zuccarello.  Boston batted around in the first highlighted by bombs off the bats of Rob Dias and Joe McCormick (in his 2nd at bat of the inning).  Boston had a milestone in this inning as Guy Zuccarello scored (after hitting Ron in the arm on the first pitch).  His grounder up the middle resulted in his 100th run of his career.  At this point in history he is one of just seven players with 100 Renegade runs.  Guy would not have much time to celebrate. In the second inning, Indy got on the board with runs by Eddie Brown and Cleo Stephens.  During this inning Guy made the final out on defense off the bat of Dan Lowery but he  took the ball off the face and came back to the bench bleeding from his nose and lip.  The bats of Boston would be too much as the Renegades batted around again in the 2nd inning with Dias, Zuccarello (with gauze shoved up his nose), McCormick and Larry Haile all plating runs on bombs hit into the outfield.  The booming bats for Boston gave trouble to Indy as both Eddie Brown and Cleo Stephens left the game with injuries in this inning.  Guy would exit the game as a precaution to get the bleeding to stop.  In the 4th inning, with a comfortable 12-4 lead, Joe Quintanilla and JJ ward would plate back to back runs.  Two veterans who have been with the team for years and had battled injuries all season (Quintanilla an elbow and Ward three broken toes) would score their first runs of the year.  Melissa Hoyt would also see action in this game as she got in for the 5th and 6th innings.  She became the first female player to play in a World Series game for the Renegades since Kae Rausch played in 2007.  Boston Would Roll as Rob Dias would score 4 runs in this match (his first career 4 run game).  This offensive game would rank 3rd in team history for runs score (19), batting average of .500 (ranking 13th) and the 10 run differential was the 5th biggest margin of victory in history.  Little did the league know…the Boston bats would be a force this week.

Arizona is pummeled by a phenomenal Renegade offense 15-5 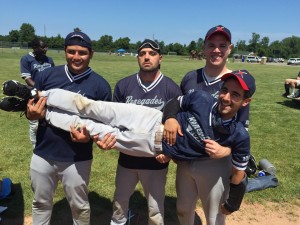 Game 2 of the World Series pit the Renegades up against a second team that broke off from their parent organization.  This Arizona team had 6 of the 7 players who would play in this game appear against the Renegades with the Southwest Slammers in the 2014 season.  It was a new team, with familiar faces.  Boston would lose the coin toss and be the visiting team and this would start something big in Renegade history.  Joe McCormick would lead off the game with a blast Into left field.  Larry Haile would then be stopped on a grounder to  third.   Rob Dias would loft a weak fly ball up the middle and score.  Shayne Cantan would then lift a fly ball to the right side with spin to score the 3rd run.  Guy Zucarello would then score as would Joe Yee on a line drive up the middle. McCormick would plate his second run on a bomb up the middle.  Larry would strike out for his second out of the inning.  Dias and Cantan would plate runs on fly balls to the middle of the field and Guy Zuccarello would plate the final run of the inning on a laser up the middle.  When the dust settled, Boston had plated 9 runs.  An achievement they last did at home against New Jersey earlier in the year.  In the third inning, JJ Ward came off the bench to play and hit a hard shot to the left side.  Pete Trejo raced after the ball, dove and the ball landed square in his baseball glove as the Renegade coaches looked on with awe.  Not many players even play with a glove.  Without that glove, JJ likely would have scored…but this was one of two web gems of the day.  After three innings the Renegades invoked the 12 run rule with a commanding 15-2 lead.  This new team looked very bad on defense with huge holes left uncovered…but their swing were big and mighty.  In time, they could have a very good offensive team.  As we entered the 12 run rule part of the game, the Renegades would finish the game playing three straight innings of defense.  A few highlights happened here.  In the Zona 5th inning, Jen Boylan stepped to the plate 0 for 2 with 2 strike outs and she hit a ball weakly down the right side of the field and took off for first base.  At about 40 feet into her sprint she plowed into and over the umpire knocking the umpire on his ass.  That would not deter Jen as she may not have been officially ruled down by football standards and kept chugging.  Sadly she was stopped.  Since the umpire is part of the field of play, she was allowed a do over and she was stopped by JJ Ward.  To see her plow this umpire over and keep going showed grit, determination and power!  Later in this inning, Pete Trejo stepped to the plate 0-3 on the day and laced a low line drive to Guy Zuccarello.  As guy was shuffling to his left…the ball hit him on the fly and kicked to his right.  Joe Yee was playing third base and quickly stopped and pivoted to run in the opposite direction for an amazing web gem from the Renegades.  When this game was over, JJ Ward played a few solid innings for Boston at Right Shorty picking up 3 stops on defense, his first of the year and this would give him confidence to chip in for the rest of the series.

Renegades light up the Lightning and clinch team’s second one seed in World Series history, winning 10-2 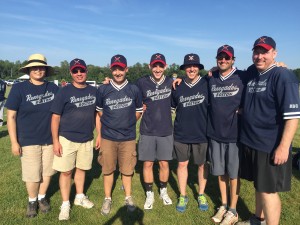 From Left to right these volunteers were with the team for the 2015 world series: Yuki Ara, Mike Marciello, Ace Lenicheck, Jamie Dickerson, Bryan Grillo, Ron Cochran and Rob Weissman

Boston would close out day one of the World Series against a known foe, the New Jersey Lightning.  The third consecutive team impacted by a mutiny…but this time, many of the players left the Lightning to form the New Jersey Titans.  Since Boston finished off Arizona quickly, we were left waiting for the NJ/ Knights game to end as that game went extra innings and the Knights eked out a 4-3 win.  Due to the length of this game and the distance to the concessions stand, we had an excruciating wait before our game could start.  When the teams finally began to get ready, the key difference was the Lightning pitcher was Kevin Barrett of the Cleveland Scrappers.  This would likely mean more offense from New Jersey than in the past two meetings.  We had also learned their defensive whiz kid, Casey Bahn had spent the night in the hospital due to hydration issues.  With the familiarity of the Lightning, Weissman trotted out a new line up with the goal to rest some bodies.  Joe Quintanilla, JJ Ward and Tim Syphers would all get their first starts of the season in the lineup.  This game would not start like the previous ones as the Renegades needed to shake off the long break and the rust that went with it.  McCormick was able to score to lead off the game but then the Renegades would have not one but two huge base running blunders by Joe Quintanilla who ran to the wrong base before correcting himself and was put out by a step.  The big boner of the World Series occurred with Joe Yee at the plate.  With three strikes he hit a weak ball up the middle and took a step to the wrong base as well…but the difference is he never ran to the right base.  Instead he stood at home plate.  The sad thing was the defense stopped pursuing the ball..as both teams sat in silence and the coaches agonized because they could not say anything.  In the end, Casey Bahn picked up the ball and Yee was out.  Weissman was livid because players are taught to run everything out.  Apparently Yee thought he heard “foul” from the Renegade bench.  So as the Renegades took the field in the bottom of the first, they should have had at least three runs.  Then something happened that had not happened all year…New Jersey took the lead with run scoring hits by Sherlock Washington and Doug Winthrop.  The Boston bats would put it away in the next inning as they were able to stop the mental mistakes and built a 5-2 lead. With one out in the bottom of the second, Joe Yee was involved in another crazy play.  This time, Sherlock Washington hit a shot that ricocheted off Joe McCormick who was playing in the left shorty spot…but the ball changed direction toward the middle of the field.  Again, Yee stopped on a dime and reversed direction to make the stop…for the web gem of the game!  In the third inning, Tim Syphers delivered the first run of his 2015 campaign with a fly ball up the middle as the team erupted for him.  Lastly, a highlight for the Renegades here was Aqil Sajjad had been struggling with his swing and some hard work during the break paid off as he was able to put two balls in play and score a run in the 6th inning to give the Renegades their tenth run of the game.  For just the second time in history, Boston would end day one as the number one seed.  The only other time that had happened was in 2011.  The team was stoked, well rested and the injuries were healing well.  Christian Thaxton had spent the day as the on deck circle man.  He was itching to get in the games..but was held back due to a hip flexor strain he suffered at practice just a few days ago.  His training wheels would come off soon.  For the Renegades, they would say goodbye to coach, Jason Lenicheck after this game.  He bailed us out and provided a driver for the World Series.  He also gave Bryan Grillo and Jamie Dickerson a game off from calling in the field on the first day.  His contribution was immense and he was missed the rest of the week.  We are just fortunate to have amazing volunteers like Ace who has been with the team since 2004.