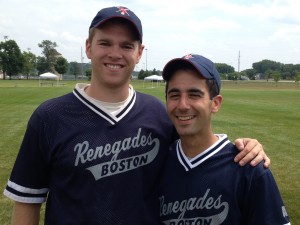 All week the renegade players wanted a chance at a big time team but the schedule called for rest. The coaches told the team if they won the games they needed to, they would be playing big time teams Friday. Bayou City awaited the Renegades. A team that entered the tourney as a two seed and who entered this game with 4 wins against 2 losses on the week. The Renegades discussed the importance of playing loose and having fun. They were a significant under dog in the eyes of the NBBA but not in their own eyes. This was a game we thought we could win if we played well and if we were mentally tough. The game was delayed by about 25 minutes as Rob Dias was awaiting a trainer to attend to his wound on his head. During this time, two members of the Bayou City Heat volunteers came to help Rob with their nursing background. While the Heat warmed up with a song, Coach Weissman got in Larry Haile’s face and screamed at him for a good thirty seconds to attempt to drown out the Heat and Keep Haile’s focus on the Renegades. It worked, the team was laughing and staying loose and having fun. Tanner Gers would lead off the game with a hit unlike any the Renegades have ever seen. It went higher in the air than it went out in the field. When it hit the ground in front of Guy Zuccarello, Gers had scored. Daryl Minor then hit a blast to deep left field but Weissman had inserted Aqil Sajjad to start his first ever game as rover and Sajjad made a huge stop as the Renegade team exploded with cheers. In the bottom of the frame, the Renegade bats began to pepper the left side and after one inning Boston was ahead 2-1. In the second inning Guy Zuccarello made two stops on the 5/6 hitters for Bayou and Gers struck out. The Renegade bats stayed hot as Dino Vasile would lead off with a weak hit to the right side and then McCormick, Dias and Guy would plate runs on more hits down the 3rd base zone where Jason Walters was struggling to make stops. On the side lines, Blake Boudreaux was warming up as he had not played much with an injury. Bayou City was trying to sub people out of the game to get some bigger bats into the line up as they faced a 5-1 deficit after two innings. There was more than worry going on, Bayou City started complaining they could not hear the pitcher even though the whole field could hear Weissman yelling “set”. Rule books found the field, Bayou players were complaining and Boston was staying loose and laughing it off on the bench as they knew Bayou was trying to play head games. In the third inning, Daryl Minor plated a run but Zuccarello would make two more stops. In the bottom of the inning, Larry would score a run in the strangest of ways as the base cut out about 70 feet before he got there…but Haile kept chugging and scored on a base that was not buzzing. Bayou City was not happy with this play and Boston was expecting them to patch Haile accusing him of cheating. McCormick and Dias would also plate runs and it was now 8-2. Things were getting ugly. Boston was up big, they were hitting better than Bayou, they were playing loose and Bayou was still complaining about Ron’s cadence. Before the 4th inning started, Bayou did decide to patch a Renegade…but it was Zuccarello they accused.

It’s unclear if they thought he was cheating or if they were playing mind games….but they picked one of the most mentally tough players and it had no effect on him. Things got worse as the two teams were at each other, Justin Manjourides called out Joseph Fleeks for not having a blind fold on in the on deck circle and to the chagrin of the umpire, a strike was awarded. Then Bayou City tried to renter Bam Bam Clark into the game as a hitter and a long argument broke out over the legality of the move because Boston thought he had not been out of the game for a full six outs. During this time, Joe McCormick started a rhythmic clapping in the field that soon spread to the entire Renegade team. Bayou City would not like this and eventually drowned it out. Boston was in their heads and the Gades were loving it…especially Weissman who had made the team read a book about mental toughness. Heading into the bottom of the 4th, Bayou was climbing back and the score was 8-5 and Bayou had made a strategic move that was paying off. They moved Walters out of the third base spot and brought Boudreaux in during the third inning. After 4 frames, Blake had racked up 4 stops in the 2 innings he was on the field and Boston now led 9-5. The complaining about Cochran’s low volume cadence was over as the head umpire screamed that it was enough and that everyone could hear Weissman. Bayou City stopped the complaining and with Boudreaux at third…the bats started to wake up. In Boston’s worst inning of the World Series, Bayou City scored 7 times highlighted by a pair of runs from the 6-1-2 hitters in Darnell Williams, Tanner Gers and Daryl Minor (Gers and Minor would make the offensive all star team). Weissman was looking for answers and with two outs decided to make a sub to give Aqil Sajjad a break at rover and allow Joe McCormick a chance to make a stop in deep left. Thanh Huynh entered the game at right shorty in a crucial moment. Daryl Minor would hit a weak pop fly to Huynh and he just missed the play. Weissman’s magical moves had run out of luck. The score was now 12-9. Blake would be on fire in the field and would make stops on Zuccarello and Joe Yee to start the 5th…before Dino Vasile hit a pop fly to the right side to score making it 12-10. Boudreaux had 7 stops in this game and was shutting down the Renegade offense. In the 6th inning, Boston was shuffling Huynh and McCormick around the field but it did not matter as Zuccarello made two stops and Dias made one to shut down Bayou City for the first time since the second inning. Hope was still alive as Boston was the home team. Joe McCormick led off the 6th with a grounder that got by Blake and the Renegades were down 12-11 on Joe Mccormick’s 4th run if the game. There were no outs and excitement rose. Rob Dias would then hit a grounder up the middle and be stopped by Darryl Minor. Guy came to the plate and the coaches decided to try to get him to hit to right side of the Heat defense.  the effort failed as Cochran and Weissman struck him out on 4 pitches for the 2nd out. Joe Yee would be the last hope. Yee was focused and determined but he would ground a ball up the middle that Blake Boudreaux would range way to his left for to end the game. Bayou City had come back to win this game 12-11 on the defensive play of Blake Boudreaux who made 8 stops in just 4 innings of play at third base. It was an amazing game filled with drama and passion. Boston was eliminated and packed their bags to play for 5th place against the Chicago Comets. 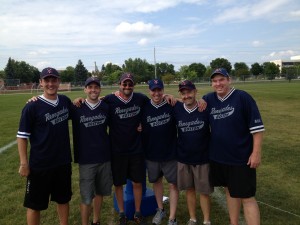 Chicago had lost to Colorado 15-11 and awaited the Renegades who were heart broken over the close loss to Bayou city. The Gades would try to pick themselves up but it would prove difficult as they left everything on the field In the previous game. This game was important as it would make the winner a number one seed in the 2015 World Series in New York. Weissman was trying hard to get the guys pumped up and Chicago Coach, JT Herzog was going to start some of his younger players. Herzog had never watched his team lose to the Renegades and he had always acted as a mentor to Weissman on how to run a home grown team. The youth for Chicago would have fresher legs and more energy. After 4 innings Chicago was ahead 9-4. Youngsters, Corey White, Eric Rodriguez and Tyler Rodriguez had plated 6 runs for Chicago and were racking up the stops on defense. Boston’s defense looked tired and Weissman was asking them to pull their heads out of their asses. The offense would not quit for Boston as McCormick and Dias would each plate a pair of runs in the 5th and 6th innings. In the end, Chicago wanted this game more and would win 13-10. the Rodriguez brothers would tally 8 runs for Chicago and make 6 stops on defense. big “G” Francese would also score 4 times. In fact at one point in the game, Weissman asked Big G to thank Boston when he accepted the MVP award for offense…when “g” retorted that he had scored as many runs in this game as he did all week. That summed things up for Boston in this game. They struggled to recover from the Bayou loss and playing 9 games in 4 days finally got the best of them as they ran Into a team that was fresher than they were. Despite the loss, Boston finished with its best ever finish in a World Series as the 6 seed. An amazing accomplishment when you look at the full body of work, the sickness of coach Weissman, the contribution of four rookies and many coaches who had helped out during the 2015 season that had Boston finish 10-6. Joe McCormick would have an amazing day scoring 7 times in 10 trips to the plate. This would give him a .600 batting average on the week and a slot on the offensive all star team for the World Series.