Austin Faces toughest challenge of the week and wins 11-3 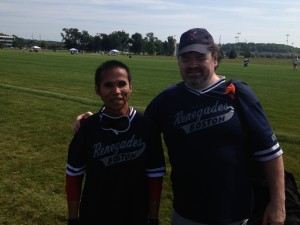 Austin has been the best team in America since the 2012 season as they have been in the finals in 2012 and 2013.  A fun trivia question is to ask who the last American team to beat them was in a World Series game.  The answer is the Boston Renegades who defeated them twice in 2011 by scores of 8-6 and 7-6.  Its rare to find a team who  has a winning streak against the Austin squad!  To be honest though, the Austin team on the field in 2014 was very different from 2011.  Austin came into this game after winning three easy games.  They 12-runned Tyler (13-7), Indianapolis (13-2) and Columbus (14-2).  Boston decided the goal today was to win two games and to  accomplish this they would need to get players some rest as they were faced with the prospect of playing three games again and the possibility to play three games on Friday.  Austin did not take Boston lightly and the 6 guys they trotted out would represent their starting line-up in the championship game later in the week. In the bottom of the 2nd inning with Austin  leading, Joe Quintanilla would dive awkwardly to a ball hit to 3rd base and would not get up quickly.  He would finish off the inning on defense but something was clearly wrong and he would not go back into the field in the third inning.  Austin would score every inning but the Boston defense would hold its own.  Guy Zuccarello would rack up 5 defensive stops.  Thanh Huynh would set a career high for himself and make 4 stops at the right shorty position as his confidence grew with every play.  In fact, he would be responsible for the three outs the Gades would make in the 2nd inning (though Austin would plate 4 runs in this inning).  Aqil Sajjad also played a solid mid field for Boston.  The Renegades would save face when Joe McCormick would score on a fly ball to left field in the 5th.  In the 6th inning, Rob “Hot Tub” Thayer would hit a weak ball down the third baseline which all star Eric Mazariegos would attempt to field as big Rob was chugging down the third baseline.  A cry of “stop” came from the Austin bench as it was not worth risking injury.  Thayer would have his only run of the 2014 World Series on this play.  This would turn over the line-up and get McCormick up again and he would score to make the final 11-3 Austin.  The Renegades were the first team of the 2014 World Series to not face the 12 run rule and would be just the 2nd team Austin would not 12 run in the week.  After the game, Rob Thayer gave everyone a goodbye hug, left his jersey in memory and headed to the airport to attend his fathers funeral as his father passed during the week.  Joe Quintanilla would be visibly upset at the prospect he may not play another inning this week as he was struggling to hold a bat and was having pain in his arm and elbow.  The Renegades needed to win their next two games to achieve the day’s goal. and they would face the winner of Long Island and Wichita which were locked in a 1 run game. 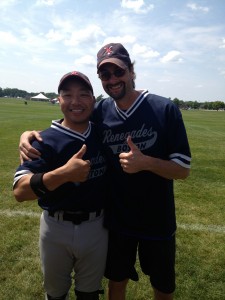 Long Island played a very chippy game against Wichita which resulted in one of their players, Meghan Fink getting “patched” as she was accused of cheating.  The Bombers held on for a 4-3 win and would next face the Renegades.  Long Island had an easier schedule on Tuesday as they had wins against New Jersey (6-3), Columbus (3-2) and lost a close game to Carolina (8-6).  Bayou City put them in the losers bracket with a 12-4 score.  Long Island was actually happy to see the Renegades as we represented friendly faces after a chippy game.  Prior to the game, Weissman said he was going to patch Fink again and she replied with a sigh”ooooo-kkkk”.  It was a joke and she was relieved.  The strategy would then start as Weissman wanted to shift into a new defense for three of the Bombers hitters.  The decision was not met with smiles from the Renegades spotters and with reluctance they trotted into the field to put the shift into play.  The first batter of this game was Jose Dejesus and on cue he hit a hard shot into deep right field into the waiting arms of Larry Haile who was shifted specifically for Dejesus.  Manjourides and Grillo both pointed to acknowledge Weissman and things looked bright for Boston when the next two batters would strike out.  Haile and McCormick would go back-to-back to start the game and McCormick would get another in the 2nd inning to give Boston a 3-0 lead.  Nick Esposito would score with two outs in the 3rd inning to make the game a tight 3-1 score.  The funny thing was Larry Haile had made three stops in the 1st two innings and he had zero stops in the previous 5 games. In the 3rd inning, Weissman decided it was time to get Joe Yee back into the game and this decision paid off as Yee would finish the game plating runs in the 5th and 6th innings to give the Renegades needed insurance.  Joe McCormick would lead the defense in this outing with 4 stops while playing the right shorty position.  Boston would advance and had guaranteed themselves at least an 8 seed.  The next opponent was unclear as Indianapolis and Carolina were locked in another tight game 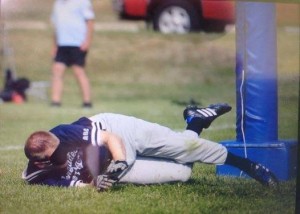 Carolina walked off on Indianapolis by the score of 10-9 and both teams were ready for their third game of the day.  The loser would go to the 7/8 seed game and the winner would still have a chance to win the World Series.  Boston had last played Carolina in 2013 in Long Island and had won a slug fest 15-10.  Weissman was hopeful this would be a different type of game because Carolina did not have a deep roster and they had played as many games as Boston had with much less rest. In the bottom of the first inning, Marlon Stover would put Larry Haile out in deep left field to start the game.  Joe McCormick would score on a pop fly  up the middle of the field to plate the first run as he ran back from the base screaming “COME ON” trying to fire the Gades up.  The flood gates would open in the 2nd inning as Marlon Stover, Tony Merriweather and Jason Ackis would gave Carolina a 3-1 lead that included a double call from Justin Manjourides and Bryan Grillo and some poor defense that gave up chump runs.  Boston’s defense was playing sloppy and Carolina would take advantage of it.  In fact as the game went on, Boston would give Carolina 4 runs on the double call and three poor plays inside 100 feet and after three innings Boston found themselves down 7-4with Marlon Stover providing three runs on a bad hamstring.  McCormick would get some luck on a cue ball hit at Greg Gontaryk on the right side that he could not come up with to make it a 7-5 game as Greg was clearly annoyed with himself.   In the 5th inning Dino Vasile stopped Jason Ackiss (who had scored twice to this point).  Rob Dias stopped James Monza and Guy Zuccarello stopped Stover for the only inning in the game where Boston’s defense would make three stops without letting up a run.  Tim Hibner was pitching well and to this point had only two strike outs. In the bottom of the 5th, Weissman pinch hit Aqil Sajjad but he would go down on 4 swings without making contact.  Larry Haile would then hit a grounder down the 3rd baseline but Jason Ackiss would collide with Monza and Haile was safe making the score 7-6.  McCormick then blasted a ball up the middle and looked like an easy run, but he ran by the base and had to come back and hit it.  The umpires had to huddle as both teams awaited the decision.  SAFE was the call and Boston had tied the game at 7 .  Rob Dias who had a big day against Southwest on this very field strode to the plate and was 0-3 in this game.  He delivered on a pop fly to the left side to give the Renegades the lead.  Guy would then hit a strong shot into left field that Monza would stop.  Joe Yee would then hit a grounder to the third base side and would be stopped by Jason Ackiss to end the inning…but Yee would not get up from the base and he could not breathe.  The original plan was for Yee to go into the field in the 6th inning to sub for Rover, Thanh Huynh.  This plan was foiled as Yee was injured.  Carolina had to send their 5-6-1 hitters to the plate in the top of the 6th.  They were a combined 1-10 in this game.  Guy Zuccarello would make stops on Tony Santiago and Robert Fairfax to start the inning.  Tony Merriweather strode to the plate with the game on the line as Guy screamed “we got two how many do we need”!  Weissman sat on the bench next to Cochran praying for an out.  The prayers were answered as Merriweather would strike out for just Carolina’s third time all game.  Boston was victorious in a come from behind win.  They played some sloppy defense early in the game but the bats and the hearts pulled them through it and for the first time in Renegade history Boston would still be “alive” on Friday.  They were now guaranteed to be one of the top six teams in the nation with a chance to win the World Series