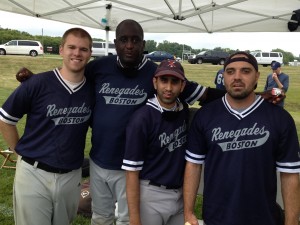 For the third time in history the Renegades would face off against the Minnesota Millers, a 100% home grown team located in the World Series host city of Rochester, MN.  One old face on this team is Steve Guerra who moved to Rochester and left the Long Island Bombers.  on Day #1, the Millers would be without their top hitter from 2013, Ben Goodrich.  They would draw first blood though as Steve Guerra would plate a run on a ball Larry Haile could not handle at third base to give the Millers their only lead 1-0.  In the bottom of the first, Larry Haile and Joe McCormick would lead off with a deep shot to left field and a pop fly to the short stop.  Rob Dias would also plate a run (his first World Series run) and the Gades would  go up 3-1.  the Renegades would start to work all of their players into this game in the 3rd inning as Dino Vasile made his first appearance in a game since the 2011 season.  He would  eventually make a stop while playing mid field in the 5th and another in the 6th playing third base.  Than Hunyh who battled back from a knee injury suffered in practice in June would also get his first game of experience in his career at Rover but he would strike out twice.  After 4 full innings the Renegades were in control with a 7-1 lead and all 11 players had entered the game for Boston.  This was important because the goal for the Renegades on day one was to make sure every player had at least 6 innings of rest through the day.  For Minnesota, the story was Steve Guerra who loves to play against Boston.  He would plate three of the Millers 4 runs.  In the end, Minnesota struggled to put the ball in play as they struck out 12 times and Boston had four different players with a pair of runs each (Larry Haile, Joe McCormick, Rob Dias and Aqil Sajjad).  Boston would stay on the field as Wichita moved their equipment on tot he field 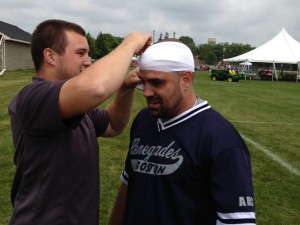 Boston was 2-0 lifetime against Wichita but their last match-up in 2012 was a struggle for the Renegade offense as Boston won just 3-0.  At first, the Renegades thought they could win this easily, because Wichita struggles to score runs, but their roster consisted of two players whom were not with their squad in 2013, Charles Anderson and Rob Weigand.  Two names that would make an impact on this game.  Boston would quickly see Wichita has a solid defense led by the “chihuahua”, Jonathan Akin who would make two stops in the first inning.  Rob Dias would plate the first run of the game with a grounder up the middle of the field to lead off the bottom of the 2nd inning.  After two strike outs, Larry Haile would have some bad luck as he hit a line drive up the right side that would just hit Sonic, Ron Smith for his only stop of the entire World Series.  Some Sonic luck and solid defense would keep the Sonics in the game and their bats came alive in the 3rd when Charles Anderson hit a shot to left field.  Rob Thayer appeared to have a beat on it when Mid Fielder Rob Dias angled back and tripped over Thayer vaulting Dias into the air and when he came down on is head things looked bad.  In a scary moment, Dias almost made the play but Anderson was safe.  When the dust settled Spotter Bryan Grillo started walking Dias into the bench with blood streaming from his head. A medic was called over to look at a three inch gash on his forhead/top of the head.  It was determined to not need stitches and Dias would stay in the game.   Jonathan akin would then score to give Wichita a 2-1 lead.  In the bottom of the 3rd, Joe McCormick would lead off with a pop fly to left and even the score at two.  Rob Dias would then appear to score on a pop fly to 3rd base but after the umpires convened, the call was over turned and after three, the score was 2-2.   In the bottom of the 4th,  Dino Vasile hit the first pitch on the ground to the left side and beat it out to give the Renegades a 3-2 advantage. In the 5th, Vasile would make a stop on Chris Humphrey to end the frame.  Rob Dias would plate a run on a fly ball down the 3rd base line to give Boston a 4-2 advantage.  Boston took the field for the 6th inning with confidence. Off the bench came Rob Weigand to hit for Smith who had struck out twice.  Weigand had not played in a World Series in a few years.  He would lead off with a run scoring hit.  Weissman Would walk to the field and call a time out.  There was no panic in his eyes or voice.  He simply just did not like how excited Wichita was.  The team huddled and took a collective deep breathe to calm down.  Weissman left the field and then Kevin Burton would tie the game on a bang-bang pop up to the right side that the umps said McCormick just missed.  Cleo Stephens strode to the plate with the chance to take the lead but he would go opposite field to Dino Vasile for out number one.  Charles Anderson then represented the go ahead run when he lined a shot off pitcher Mike Woodard’s head.  Woodard collapsed in a heap on the mound and when he tried to region his balance he fell again.  The medic was back on the field and Woodard was allowed to continue despite a splitting headache.  Anderson would eventually strike out as Woodard gutted out his “braining”.  Akin would then ground out to Dino Vasile to end the 6th.  Vasile had a huge impact off the bench with a run scored and three stops in his three innings of play.  Leading off the bottom of the 6th was Joe McCormcik who at this time was 1-3 with a grounder to Akin, a run and a strike out.  As the defense set themselves, Coach Weissman leaned into McCormick and asked him if he thought he had made the play on Burton in the 6th, which Joe said “yes”.  Weissman then said, “the Beepball gods will even this out on the first pitch”.  Weissman’s prediction came true as McCormick hit the first pitch into left field and sprinted to 3rd to walk off on Wichita 5-4.  When this game was over, Weissman was caught saying they had the toughest bracket in the tournament as Wichita was a 19 seed and would eventually finish as the 13 seed…while Minnesota would move up to the 7 seed.

Time to Get Rest as the Extreme downs Boston 18-6 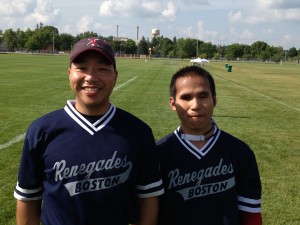 Both teams entered this match 2-0 on the day and both teams decided it would be smart to get rest for some of their players.  For Boston, Guy Zuccarello and Rob Dias would find themselves on the bench for the whole game as Joe Yee would get his first start in the batting order and Thanh Hunyh would get his first start at right shorty for the Renegades.  Only two players in the Extreme line-up would be on the field when they would eventually get to the championship game on Saturday as they started four bench players agains Boston.  The Extreme would plate 5 runs in the 1st inning and never look back.  Demielle Wright would eventually score four runs against Boston and Steve Michaels would be a perfect 4-4 as well. Clint Woodard would earn MVP honors in this game as he scored three times and made six stops on defense.  For Boston, The story would be Joe Yee who would get his first ever three run game and earn the confidence of the coach to get more playing time for the rest of the week as he made contact on 5 of the 6 pitches he saw in his four trips to the plate.  Defensively, the other question Boston had was how Thanh Huynh would react to game experience at the right shorty spot.  He got off to a rocky start missing the first three chances he had as he was caught backing up on balls when he should have been running forward.  He would eventually get some mojo going as he would make back-to-back stops against Clint Woodard and Brian Christian to end the 3rd inning.  The other positives  for Boston was the play of Aqil Sajjad who made a start at the mid field position and would make stops on three of the four balls hit his way.  Dino Vasile also had continued success and would kick in three more stops to give him a team leading eight stops in the three games on the day (tied with Guy Zuccarello).  When the dust settled, the game went a full six innings as RHI scored four times  in the third, fourth and 5th innings and 8 of their 9 players who batted would score a run.  Day one was in the books and the only injury the Renegades seemed to have to contend with was the gash on Rob’s head and the shell shocked attitudes of Rookies Luis Soto (0-5 with 4 Strike outs) and Thanh Huynh who was seeing live action for the first time.  The team would get rewarded with an 11:00 start time on Wednesday!