The bats awake as Boston beats Long island 16-10
The Renegades chalked up its worst strike out performance at the plate since 2005 in Long Island and the focus over the next few practices would be on offense. That plan did not go well when Danny Cotter took a line drive off his nose in batting practice sending him to the hospital. The man has guts and feels little pain. After getting a mask he was eager to lead the Renegades in this tournament and he had never been the number one pitcher on the mound in a Renegades win over Long Island. In the first inning, Boston started out hot as Larry Haile and Joe McCormick and Guy Zuccarello plated runs off Coter when Rookie Joe Yee strode to the plate facing Nick Chisholm, Boston’s third string pitcher who was making his first ever game appearance. After getting hit by a pitch in his second pitch of his career, Yee laced a line drive up the middle to give the Gades a 4 run advantage after a half inning. In the bottom frame, Nick Esposito would plate a run and Alex Barera would hit a bomb but would be called out running Into the Boston bench in a scary moment. This game was about offense. Boston was scoring up and down the line up and after four innings the score was 15-5 as Boston had a four run inning in the 4th that included Rob Thayer checking in with a run scoring grounder to the left side that got the Renegade bench in an uproar. The 5th inning would be the only inning the Renegades would not score and Long Island creeped back Into the picture highlighted by Lead off hitter Jose Dejesus scoring 4 runs in the contest. In the end, the Boston defense played better than Long Island and was able to make stops on the junk. Guy Zuccarello and Joe McCormick stopped 4 and 3 balls respectively, while Larry Haile made the defensive play of the game on a hard shot down the third base line from Matt Puvogel. Seven of the eight players who hit for Boston scored at least run. Joe McCormick plated four runs matching his total from the three games in Long Island just two weeks prior.

Wolfpack break the curse and hold on to win 6-5
a Boston win in this game would make them the Beast of the East. Things got off to a slow start for Boston as the first two hitters of the game would each strike out with just one foul ball amongst them. Was Dan Cotter fading before the Renegades eyes? In the bottom of the second Cotter had struck out three of four batters when rookie, Luis Soto sauntered to the dish. On the 4th pitch, he blasted a laser to left field and took off for first. He fell about ten feet before the base and crawled to it to record his first ever run and give Boston a short lived 1-0 lead. The Third inning was costly for Boston as the defense could not contain the Wolfpack bats as Scott Hogwood scored on a bomb into left field but John Margist and Randy George plated runs on weak hit balls that Zucarello and McCormick could not find in time and for the second time this year, Philly would hold a lead, this time 3-1. The strike outs would continue to pile up as Boston had 9 whiffs through 4 innings with the top two hitters in the line up holding five of those K’s. Coach Weissman was searching for answers and the pitching just seemed Inconsistent. Dan Cotter was missing his spots and the bats were silenced. In the top of the 6th Pennsylvania would get a back breaker as Casey Bahn would beat out Zuccarello to give the Wofpack a 6-1 lead. Coach Weissman had answers. One of them was Chisholm who was now pitching to more than just Joe Yee. Yee would lead off the bottom of the 6th with a deep shot to left and be put out by George. Off the bench came Aqil Sajjad to pinch hit and he delivered on a pop fly up the middle. Larry Haile then hit a hard grounder through the right side off Chisholm and the score was 6-3. Cotter took the mound again and McCormick hit a blast up the middle to pull within two runs. Pennsylvania would call a time out on the field to try to calm the defense that had held the Renegades in check all game till this point. Zuccarello would battle and on the 6th pitch after three foul balls would tag a laser up the middle for a 6-5 score. Next off the bench limped Sengil Inkiala who has seen more pitches from Dan Cotter than any Renegade in team history. These two have connected for a few big hits but not this time as Inky was stopped on a dribbler to Greg
Gontaryk and joe Yee would go down on strikes to end the game as Pennsylvania defeated Boston for the first time since 2008 by the score of 6-5. This would force Boston to need a win against New Jersey or have Pennsylvania lose for the Renegades to retain the Beast of the East title.

The Beepball gods shine on the Renegades in a critical moment as Boston beats NJ 8-7
New Jersey limped Into this game after allowing more than 20 runs to the Long Island Bombers and stood 0-5 in the Beast of the East…but they almost always play Boston tough. As the game started, New Jersey mentioned that the game needed to end by 5:30 for them to make transportation which was just about 90 minutes away. The bats stayed hot from that almost comeback against Pennsylvania as for the first time all day Boston went back-to- back-to back to start the game with Haile, McCormick and Zuccarello. Rob Dias checked in batting sixth in his first at bat of the day and hit a deep fly up the middle to give Boston a four run lead. Deshaun Widiner legged out a run In the top half of the second and in the third, the Renegade defense struggled as Steve Rutch and Rich Koppenjan played runs to make it 4-3 Boston. Rob Dias was the man again, getting the Gades a run on a grounder up the first base line to make it 5-3 after three. Sherlock Washington would cash in a run in the fourth but Aqil Sajjad would score a pair in the fourth and fifth innings and after five Boston led 8-4. it was past 5:30 and New Jersey was still playing their hearts out. Doug Winthrop led off with a blast to left that Joe Yee tracked down for his first career defensive stop. Guy Zucarello would make a play to get Steve Rutch and the Gades were one out from victory. Deshaun Widiner scored his second run of the game, Rich Koppenjan then made it 8-6 when Omar Atin stepped up hitting left handed for the first time all day down by two runs. Atin was 0-3 on the game and Boston knew his out would be huge to prevent lead off hitter, Sherlock Washington from getting to the plate. As Boston hurried to set the defense for a lefty shift, Atin put the ball in play while both spotters backs were turned away from the ball and before the defense was set. Weissman argued with the plate umpire the defense was not ready but his plea would not be heard and Washington strode to the plate as the potential tying run. Weissman was not happy about the lack of safety allowed on this play and out loud on the bench was overheard saying if there is a beep baseball god, Washington would strike out for the umpires lack of paying attention to the defensive spotters. The Beepball gods smiled upon the Renegades as Washington went down swinging and the Renegades held on to win 8-7 in another nail biter between these two teams. The win clinched the Beast of the East for Boston which finished at 5-1 with Pennnsylvanie second at 4-2, Long Island at 3-3 and New Jersey at 0-6. In 2015, the beast of the east title match will be in Boston..stay tuned to see if Boston can win for the fifth time. 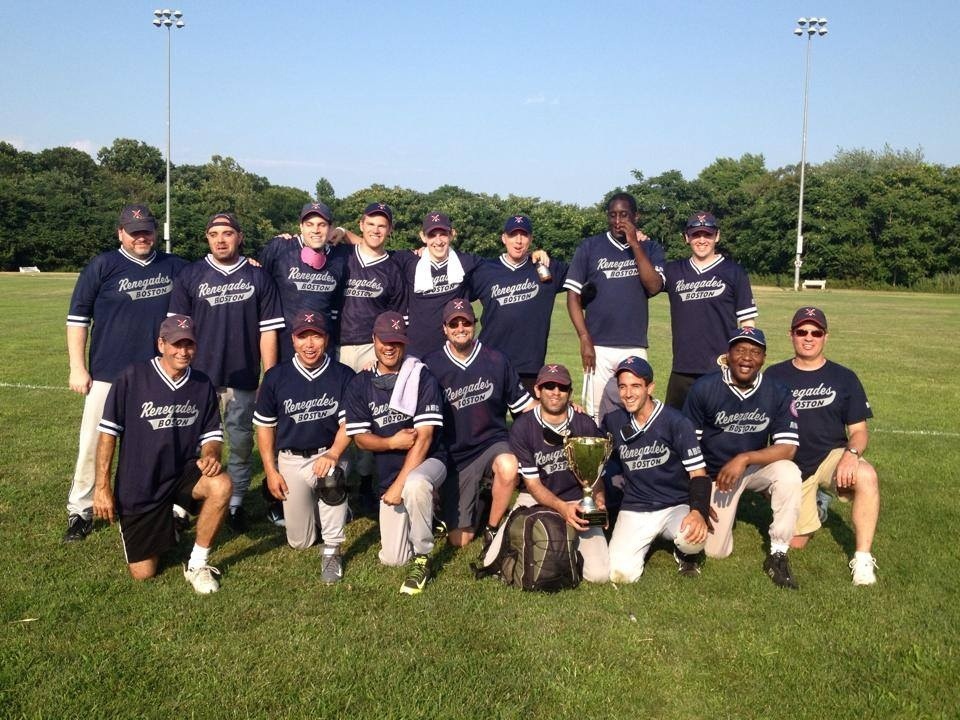