Beepball, the game where the Players are blind and the Umps aren’t! 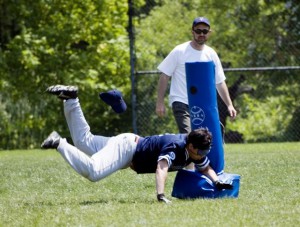 Spectators who witness today’s style of beep baseball are generally delighted. They see blind athletes dive onto the ground to stop a beeping ball and run full speed toward the sound of a buzzing base to score a run. They see desire, determination, teamwork and in many cases skilled performances of sightless players having fun in the midst of extreme competition. They also witness an occasional injury. Beep baseball is not a game for those who are concerned about a scraped elbow. Safety precautions are high priorities, but due to the nature of the game, some injuries do occur. Players know this and fully accept the injury risks for the sake of playing a sport they love. 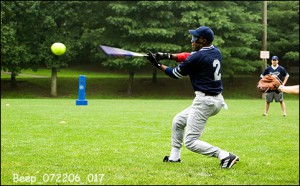 Comprehending the game is relatively easy. A contest lasts for six (6) innings unless more are needed to break a tie. A team has three (3) outs per inning, and umpires have the right to eject unruly players or spectators. However, there are some differences from regular baseball. There is no second base. First and third bases, four foot padded cylinders with speakers, are placed one-hundred (100) feet down their respective lines and ten (10) feet off the foul line. This is to prevent a runner from colliding with a defensive fielder. The bases contain sounding units that give off a buzzing sound when activated. The batter does not know which one will be turned on. When the ball is hit, the base operator activates one of the bases. The runner must identify the correct buzzing base and run to it before the ball is fielded by a defensive player. If the runner is safe, a run is scored. In other words, there is no running from one base to another. A player does one of three things when batting — hit the ball and make an out by being retired by the defense; hit the ball and earn a safe call scoring on a run; or striking out. A batter is allowed four (4) rather than the traditional three (3) strikes and only one (1) pass ball. The fourth swing must be a clean miss. 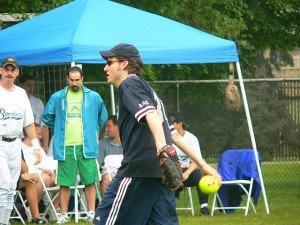 To better understand how the game is played, keep in mind that each team has its own sighted pitcher and catcher. The catcher sets the target where the batter normally swings. The pitcher attempts to place the ball on the hitter’s bat — the ball is pitched from a distance of twenty (20) feet. According to the rules, a pitcher is obligated to clearly verbalize two words. He must say “ready” just before the ball is about to be released. This alerts all players that the ball may soon be hit. As the ball is being released, the pitcher says, “pitch” or “ball.” The batter allows a split second of time to pass before swinging. If contact is made, one of the two bases is activated and then it becomes a race between the runner and the defense. Also, a hit ball must travel at least forty (40) feet to be considered fair. A hit ball that does not reach the forty (40) foot line is considered foul. A ball that travels one hundred eighty (180) feet in the air is considered a home run. A hit ball rebounded off the pitcher is ruled no pitch. It helps for pitchers to be quick and agile.

Even though a pitcher never fields or bats, his role is a crucial one. Most pitchers are generally good athletes with competitive spirits. Their success is in direct proportion to the number of runs their team scores. High ERA’s are most preferable.Playing defense is the most challenging aspect of beep ball. Rather than nine (9) men on the field at a time, there are only six (6) players in beep baseball. Not all teams use the same defensive placement of their players. 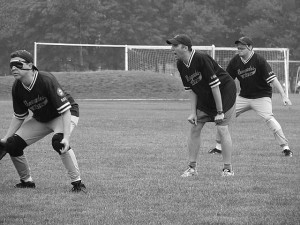 Most teams use the same numbering system to identify defensive positions. One, the first baseman; two, right fielder; three, middle; four, left fielder; five, third baseman; and six, back fielder. Also, there are one or two sighted spotters positioned in the outfield, one on either side of the field. When a ball is hit, a spotter will instantly call out the number indicating the general direction the ball is traveling. A “three” call alerts the back fielders to move in toward the center of the field. A “four” call means the middle player will move laterally right, the third baseman will move laterally left. The players coordinate their defensive moves according to the number that is called. However, spotters cannot pass on any further information, only one (1) number may be called. The players can verbally communicate with each other and frequently do. But, if a spotter says more than the allowed number, the batter is awarded a run. All good teams have spotters with the ability to give out quick and accurate number calls. 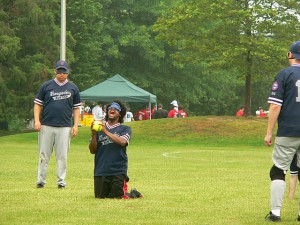 A defensive player does not have to throw the ball to another player to record an out. Outs are earned by fielding the ball before the runner reaches the base. In the umpire’s opinion, the fielder must have the ball in hand and off the ground to constitute possession. Players do not snatch balls out of the air. Many attempts have been made to catch an air ball, but in the N.B.B.A.’s history, there has been only five (5) documented cases of a hit ball being caught in the air.

Good defensive players learn to use their bodies and the ground to block and trap hit balls, and then pick up the beeping sphere and display it for the umpire’s call. Because most fielding is done in this manner, flat grassy areas, free of trees and bushes, make the best beep baseball fields. 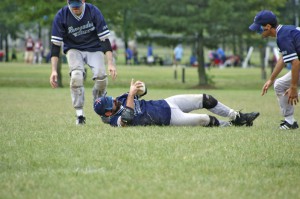 Many teams keep individual statistics on their players. Good hitting teams may have several players with batting averages of .500 or above. Players openly admit they enjoy the thrill of heftily swinging at a pitched ball and making solid contact and then charging down the base path to score a run. But, they absolutely love the exhilarating feeling of diving off to one side or the other to cleanly field a hit ball and make an out. Even the most modest players are all too willing to graphically describe the put-outs they made.

Beep baseball has evolved into a wide open competitive game. Each year, new and improved training and coaching methods are introduced. Throughout the country, there are now many, many good players and teams. As time goes by, beep baseball will get bigger and better than it already is.